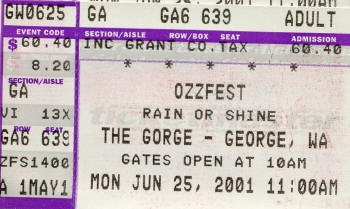 This was my 5th Ozzfest show and after a quick tally in the old ticket stub archive, also my 15th either Ozzy Osbourne solo or Black Sabbath concert. While the Ozzfest itself is a great idea, this year’s bill was laced with mostly lightweight – pop/nu-metal/rap crossover bands. I’m quite not sure what Sharon Osbourne was thinking when she put the line-up together but it is not going to make me run out and buy a “Crazytown” or “Papa Roach” CD any time soon. We came to see Sabbath and were content not to ruin the proceedings. It would have been a nice compliment to a Black Sabbath festival show, and to their fans to have at least one the few original classic NWOBHM bands still together in some form or another sharing the bill. I guess the thought was that this line-up would attract a younger, more merchandise hungry crowd.

At last year’s show when Ozzy headlined along with Pantera, there was quite a party atmosphere going on in the Gorge campground. This time as we made our way up to the site instead of a party, we were met with dozens of police officers complete with shotguns and dogs. Apparently something terribly wrong had happened at an earlier show in the Gorge and they weren’t going to tolerate a rowdy Ozzfest crowd. Our car was searched for weapons and fireworks, which was fine but after everyone had been cleared through and set up camp, they sent around teams of security guards searching people’s tents! I was sitting at my site minding my own business just about to smoke a bowl of hash out of a 16 ounce Budweiser can when suddenly security stormed through. They grabbed my make shift pipe and accused me of smoking crack in it. Excuse me! They crushed my Bud can, acted like complete assholes to us and then moved on to hassle other Ozzfesters. Signs were even posted in the campground saying that crowds of five or more people were not allowed to gather on the campsite. Some party?

The next day we waited until quite late to go in and as the sun started to go down, slowly made our way to the venue in time to catch the last few songs from Slipknot. While they have a rather amusing stage show with all those guys running around in clown masks, you have to wonder if there will be much longevity to their kind of music. I know it is all in good fun but what ever happened to writing “songs” with hooks, catchy lyrics, and cool guitar parts. Somehow nowadays if you tune your guitar way down low, go “junt, junt, junt” over a pre-recorded loop while someone with no singing voice barks over top it is considered to be“metal”. Maybe I’m just too old and it’s all really good but I just don’t get it.

The Ozzfestival production was slick and ran like clockwork. After a very quick turnaround next up on the main stage was Marilyn Manson. I have seen them before as a headliner and remember being impressed by their live show. While the festival stage version was somewhat paired down, all the sight gags they are known for (stilts, pulpit, video screens & pyro) where still there. The band looked and sounded great. Dressed in nothing more that what amounted to a small roll of black tape, Marilyn strutted around on top of his game in front of such a large outdoor crowd. Guitarist John 5 was made up like the Joker on acid swinging his head around and grimacing like a man possessed. They did all the hits and some new songs I wasn’t familiar with. It was all very good, well paced and their showmanship was fantastic.

After a short intermission as a few tunes from Tony Iommi’s solo album played over the PA, it was finally time for Black Sabbath. The daylight had faded and as the crew rolled out Tony Iommi’s wall of Laney amps, Gezzer’s monster bass rig and Bill Ward’s most Sabbathy looking drum kit, a large crucifix that said simply “Black Sabbath” was suspended from the top of the lighting grid. Behind the amps there were two large wings with skulls and horses etched on top. The stage looked really cool. The sun had fully set when an intro video montage began to play over the video screens. The anticipation in the crowd to see Sabbath was getting intense. Part way through the video opening with the stage crew still making some final adjustments, a live mic opened over the PA and we heard “Come On! Come On!! Come On!!!” Yes, Ozzy was finally in the house. The crowd on the floor was worked up into a fever pitch and pushed forward up against the chain of security guards that lined the entire front length of the stage. Then Ozzy taunted the crowd some more. “I can’t fucking hear you?!?! Come On!! Come On!!! The security guards got locked into their final positions. While still hidden behind the stage Ozzy charged up the crowd even more with “Are you mother fuckers ready to go fucking wild!?!? Let me fucking hear you!!!!” The video montage came to an end and there was a huge roar from the fully sold out amphitheatre as rather happy looking, plump Bill Ward mounted up on the drum platform. Tony Iommi and Gezzer Butler walked on from each side of the stage grinning from ear to ear like they though this was probably a pretty cool thing to be still doing. Then finally from behind center stage through a thin fog of dry ice, a slightly haggard looking Ozzy appeared.

I don’t know what it is that he has other than just pure charisma but by merely standing there slowly waving his arms in the air Ozzy still has the ability to make a huge crowd go absolutely fucking ape shit! Opening with NIB the sound coming off the stage was as nothing short of stunning. When those four guys get together and play, holy mother of fuck is it heavy!!! This was only the 9th show on the tour and Ozzy’s pipes were in fine form. Although his movements have slowed down and his leapfrog’s may not have been quite as high, he still sounded great. I have been to shows before when he has lost his voice and watched him struggle though the set anyway. It is a lot better show when he is able to give his best performance.

I was looking forward to hearing the new Sabbath song "Scary Dreams” which up to that point had been in the set at all of the earlier shows but for the Gorge it had been dropped. They had also played a few different older songs at previous shows but those were gone too. I’m not sure why because Ozzy and company seemed to be in excellent form. “The Wizard” with Ozzy on harmonica was a song I had never seen them do before and the only change from a very basic stripped down Sabbath set.

In order at The Gorge it went:

That was it, and then Ozzy said “Thank you, please don’t drink and drive so we can come and kick your ass again next year – goodnight!” Even the banter between songs right down to “The crazier you go the longer we will play” seems to be scripted on Ozzy’s teleprompter. During the set he periodically took some deep blasts off an asthma inhaler. Thankfully, there was no serious incident like a few years ago when here in Vancouver he took a couple of huffs off the inhaler during the beginning of the fourth number then went off stage and never came back, the lights came on instead.

Yes, sure it would have been nice if this time if they played a little longer and did some other songs but it was still fucking Black Sabbath and I thoroughly enjoyed every second of it. I don’t know of any other band ever that could draw 45, 000 people from three different states and parts of Canada into the middle of the desert, come out and do nine songs then send everyone home with a smile on their face. Ozzfest 200? Ozzy solo? Another Sabbath show? Yes, of course I’ll be there. “Or you children of today, are children of the grave - Yeah!”